Since the last update I have finished editing of a route schedule. I think it is easy enough to use, but it might need some more tweaking over time, and might also need some further functionalities, but for now it is working.

I have also fixed a lot of the different minor bugs as well as implementing filtering for some of the lists like airports and airliners, so it is now possible easier to select the correct items.

One of the things I have always been a little uncertain of, is how the demand between destinations should be. Currently and also in the older versions the demand have been calculated between airports, but I am currently trying to look at a way of implementing so it is calculated between the cities.

I have tried to reuse the existing demand we have set up between the airports. For a city I have defined a range which defines which airports the city is serving. When I get to calculate the actually demand for a route (if between cities) then I will do it based on distance to city, airport size as well as the number of routes between the cities. But please let me know if you have any inputs for this.

A small milestone but this is actually update number 50 🙂 And the update is also a small one.

Since the latest update we have released a new version of the game, which mainly focused on optimizations of some of the existing functionalites and screens. I have only recieved a couple of bugs for that version, so I will try to fix those soon.

One of the things missing from the latest version, which was noticed by several users, was the possibility of editing the schedule of a route. This is something I am currently trying to implement. 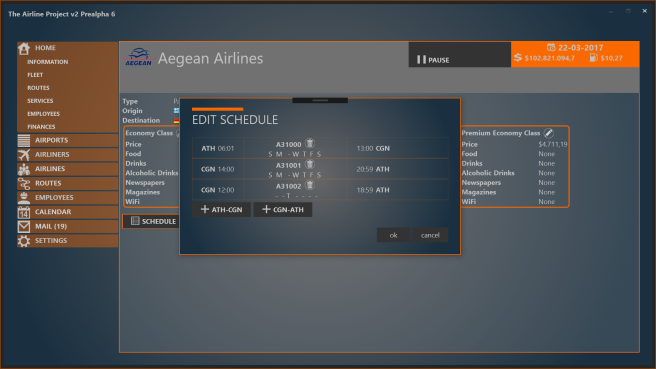 After that I will focus on the bugs I mentioned earlier, and then I will look at the number of different inputs I have recieved.