Since I how have almost the whole GUI framework in place, it is quick to add new GUI parts. This means that I am able to create a lot of different screens, where some of them are still not that complex.

The main thing I have worked since the last blog, is the possibility of buying an used aircraft. 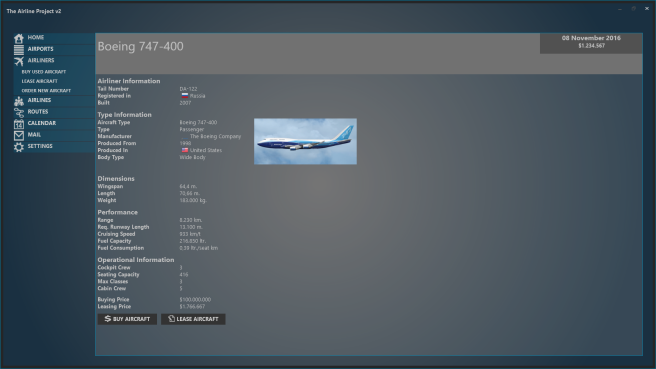 I am still a little “concerned” that the screen looks incomplet, since there are no data shown in the right part of the screen. But that is something I will need to focus later.

Since it is now possible to purchase an airliner, I have also changed so it is possible to add an aircraft to a route. And I know that the example shows the same origin and destination airport, but that will of course be changed soon.

One thing I have changed is that the different image buttons aren’t using images read from a file but instead uses a graphics path.

I am also working on getting the data over to different database tables, which seems to make it faster to start up a new game, instead of having to read a lot of different xml-files. This is mainly for the huge number of airline-files. At the moment it is still a mix of the old xml-files and the new database structure, but that will be changed over time.

For the last two weeks I have worked a lot of a number of pages. I haven’t implemented them fully, but this is mainly done to give me an idea of how the behind-the-GUI model will look like.

I have worked on the routes page where it is now possible to create a new route (cargo or passenger) between two airports.

One of the main things I have tried on compared to the old version is to reduce the complexity of the code as well as trying to make the GUI more user friendly. The last thing means less buttons and less text on each page.

Another GUI part I have worked on is the airliners page, where I have started on the page for purchasing an used airliner. I am currently using “dummy” data but the page would look like the same.

I think the next 14 day will be used on the rest of the pages for the airliners.