As I wrote last week we had some issues with leasing of airliners, so I have tried to optimize that further this last week, so now it should work 100%.

I have also worked on some minor bugs which mostly were related to creation of AI routes.

Else than the minor bug fixing I have added two new functionalities/views.

The first is some new staff types which are just some random static names for the different roles. The main reason for this addition is to add some more employees for which the airlines needs to pay a monthly wage.

The other new thing is actually an old view which I have reintroduced. Long time ago we had the view for showing arrivals and departures from an airport like the boards you see in an airport

Lastly I have added some new airlines and update the major destinations. These data have mainly been contributed from users of the game, so thank you very much!

Since I am going on a family trip this weekend I will wait with the release of the next version until Monday/Tuesday next week. After that the first couple of weeks will most likely be used for bug fixing before looking at implementing new features.

One of the issues we found this week, is that if you lease an aircraft from another airline, then the other airline still think it should operate the aircraft. We also found the issue, that when leasing an aircraft from a leasing company, then the aircraft sometimes ended up in the outleasing group, and therefore couldn’t get routes assigned to it. These issues have both been fixed.

To give the user a better overview of the route they are about to create, I have created a route advisor box on the create route page.

One of the requests we got was to show the market share on the different routes, so I have created a whole page for that, since I couldn’t get the information placed correctly else where.

The next week will primarily be used to finish the existing version so we are ready for a release by the end of the week/beginning of the week after.

We still get a lot of requests/tweaks/bugs reported in the forum, which is very cool, and I hope I am able to answer and implement most of them. So please keep the inputs coming.

The last week have mostly been used to implement and fixing some of the minor things from the forum, since I have been very busy at work, so I haven’t got that much spare time for some of the more complex taks.

One of the things I have implemented, is that you can now set if older mails should be deleted after a specific period of time.

I have also started on looking at a new GUI, but I am still not sure when I will start implementing it. The main reason for a new GUI, is that it seems like the existing way of we have implemented it creates some lags. The task is a very huge task and taking a lot of time, so it is not just something done in a week or so.

The main focus the next week will once again be looking at some of the minor requests from the forum, and I guess I wouldn’t implement something “big” before the next release is out.

For now it seems like the next release will be out in the next 14 days if everything goes as planned.

I have also planned that I will (hopefully) be able to make a new release each month, so the game will get some progress.

Since last week I have focused on adding new tax deductions, so we now have the following ones:

I am not sure if maintenance should be decuctable, but if it is I can always add it.

I have also added an overview on the finance page where you can see the expected tax payment for the current year. 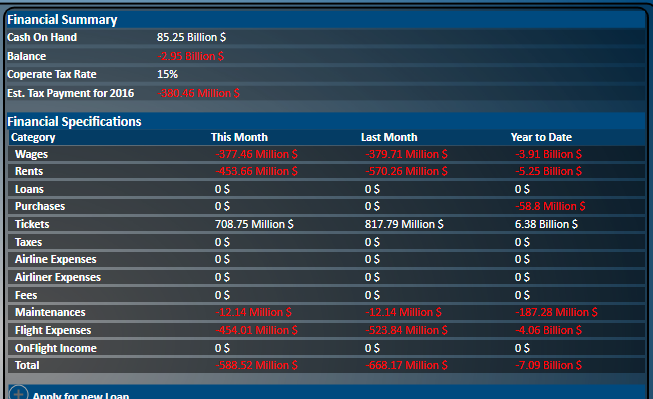 I have also worked on the way the destination for an AI route is calculated, since it seems like the AI doesn’t look at pax demand before creating the route. So a lot of the major airlines ended up having routes to some very small algerian airports, which isn’t very profitable.

Next week I will try to take a look at adding joint venture between airlines. One of the features would be to suggest a route for the airline you are in joint venture with.

Remember that you can always see the changelog in the forum: Changelog

To contribute with translations we are using transifex: Here

I would like to wish everybody a happy new year and I look forward to interact with you in 2016.

The last couple of days have been, besides celebrating new years eve, spend on implementing the feature where a human subsidiary can be operated by the CPU.

The next week I will focus on the taxes, since it seems like it is not working as planned. I will also look at a way of showing how the tax is calculated as well as making sure that we have the correct tax deductions.

So far the next release haven’t been planned but I expect that it will be released some time before the end of January.